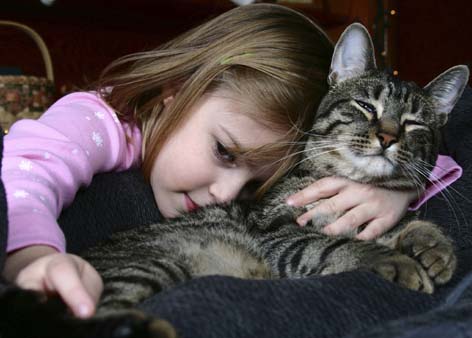 The one common denominator of domestic shorthair cats is just that – short, sleek coat. Otherwise these cats can come in every imaginable shape, size and color.

DSH or the domestic shorthair cat is by far the most popular cat in the world. Probably because it is very easy to find, is not expensive to get, and is a low-maintenance pet. It is lovingly called the “moggie” or “mutt of the cats”. If the term “mixed breed” is used, then usually the cat has identifiable features of some pedigree cat breed (meaning a purebred cat managed to escape for a little adventure in the near past…)

Its short hair does not require much grooming, but should be brushed occasionally. Short haired cats shed hair too, and grooming will keep your home tidier.

But mostly these cats are very easygoing, loving and friendly. For this reason they are good as first time pets, as well as a good choice for a family with children. Just watch that your children don’t handle small kittens too roughly. A domestic cat is considered an adult at eight months of age, but becoming fully mature can take up to two or three years. 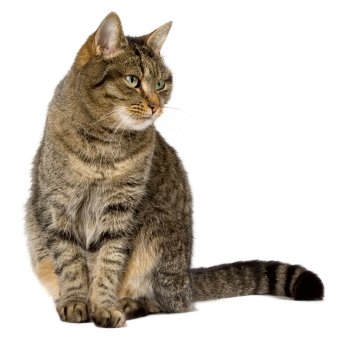 Looking back at how the domestic shorthair cats spread around the Western world, the Phoenicians and Romans took the cat with them on their travels, and so the cat found its way to Europe and British Isles.

And good that they did – in ancient times life was tough and no one could afford to lose their food to rodents. Cats were very helpful in this respect.

This is also why the pilgrims chose to bring cats with them to the New World (they are mentioned in written records from Jamestown 1609, and they were obviously valued for the work they did).

The term used for these mice-hunters was “the working cat”, and they were valued for their important role in keeping the famine away in the rat-infested colonies. They were allowed to breed freely, which greatly added to their gene pool. This is the reason that the domestic short hair cats are considered to be very healthy. Only routine visits to the vet are required (and do remember to have you cat vaccinated if it meets other cats outdoors).

One thing that the domestic shorthair cats have a tendency for is overeating. They sure love to be home for dinner… So do not give too much food to your cat. If you cannot feel the cat’s ribs at all when you run a finger along its sides, it is too chubby. Cut down the food a little, and try to play with your cat to make it move.

Kittens in a litter may all look different, because they can all have different fathers. (My own first cat Misu was a shorthaired grey tuxedo cat, and all the others kittens in the same litter were white with small black spots). 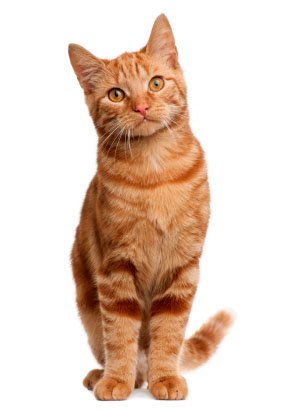 The body type varies too, of course. It could be generalized that cats that live in colder climates have a chubbier appearance and thicker coat than cats that live is warmer climates. And although the colors can be just about anything, a local gene pool may cause cats in one area to have a greater percentage of some specific color or pattern. Usually, though, if cats are left to breed freely, the population tends to “revert to type”, which means that the tabby pattern becomes more dominant. Of colors the smokes and silver tabbies are quite rare and the tabbies, solid colors and tuxedo cats are the most common.

The tails of domestic shorthair cats can be long or short or something in between. Or it may be the tail is kinky (a feature they consider lucky in some parts of the world and say this kind of tail keeps the luck in the house of the cat’s owner). Sometimes the tail may be a stump or missing completely. But mostly domestic

One special feature people seem to like a lot, are the cats with too many toes, the polydactyl cats. Their fame spread thanks to Hemingway who had these cats.

Your domestic cat could live even up to 20 years, given proper care, but if you let your cat go out on its own, you might expect this life expectancy to drop to one third. So if you want to keep your feline friend for a longer time, keep it indoors.

Cat allergies come up in discussion. If you are allergic to cats, do consult your physician if you plan on taking a cat. What you are allergic to is the dander in cat’s saliva. It spreads this to its coat when it grooms itself. Of course there is less of dander in shorter hairs, but where there is a cat, there is dander. Brushing your cat and bathing it prevents cat hair from falling everywhere in your home. There are also cat breeds that don’t shed much hair.

Domestic shorthairs can be quite playful, and they are intelligent. So do play with your cat to keep it active. It is possible to train some cats to fetch, for example, but a cat is not a dog. If it is not in the mood, no matter how you try, it will not budge. Also you need to train the cat for a long time with patience. Do not punish the cat but use positive reinforcement.

And if you are ready to get a domestic shorthair cat as your pet, do consider getting your cat from a cat shelter or rescue organization.

If you are more interested in domestic longhair cats, you can read more about them by clicking here. 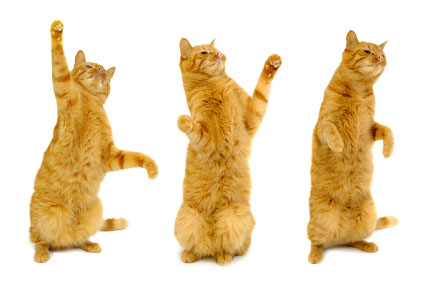 Photograph copyrights are as follows (do not copy without permission from these photographers:)

Are you owned by a purrrfect domestic shorthair cat?
Tell us about your cat, just
CLICK HERE