When bobtail cats are mentioned, many people can usually mention at least one breed - which is usually the Manx cat. For many years I thought that the Manx was the only bobtailed (or in some cases even tailless) domestic cat. I even tried to get a Manx kitten years back, but there were no breeders nearby so I never ended up being owned by a bobtail.

The first new bobtail breed I learned about was the Japanese Bobtail. I searched up information about the breed and was totally surprised at how different it looked from the Manx - and what a long history it had. It really seemed an important part of the Japanese culture and mythology. I found out those cute little Japanese cat statues I had so admired for a long time were actually Japanese Bobtails.

Now I was really curious and found even more bobtailed felines: the American bobtail, the Kurilian bobtail, Pixiebob... Goodness, there were so many bobtailed cats!

Clearly there was a lot of research ahead of me when I decided on putting up this cat breed website. But what a fascinating subject of study!

Many think bobtails have trouble with their balance for the lack of the tail, but this is really not so. They can be amazingly good jumpers for example. But even minus the tail they are one hundred percent cats, make no mistake about it! And many people swear they are the best of cats.

So here are then articles written about these lovely cats with a personal short tail - or no tail at all.

This breed is loved by many because of its beautiful looks and lovely nature.

The history of the American Bobtail Cat.

The Looks of the American Bobtail

Back to Homepage from Bobtail Cats

The photos of the black Kurilian bobtail are copyrighted by LaraKursina at Istockphoto. Do not copy.

The photo of a longhaired bobtail is copyrighted by Grase at IstockPhoto. Do not copy. 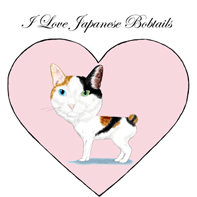