There is a certain teddybear-likeness in British Longhair cats.

The overall look of a British Longhair is a well rounded cat of medium or large size, with great substance. Muscles and bones should be powerful and wide. The cat looks thick and stocky, but is not fat or soft. 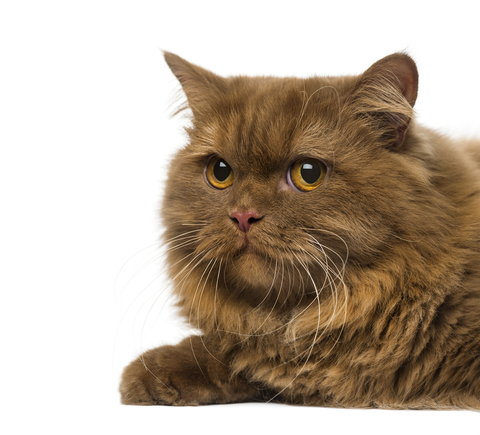 The head should have volume: large, broad and with full rounded cheeks - you might even call them chubby (the word “chipmunk” might give you the idea of their looks).

The neck should be short and have an almost bulldog-kind of quality, especially with the males.

The ears are erect and should not be too big or small but medium in size. They are set wide apart, broad at the base and the tips are slightly rounded.

The eyes are very large and round, expressive. Their shape give this breed an expression that could be called “sincere”. 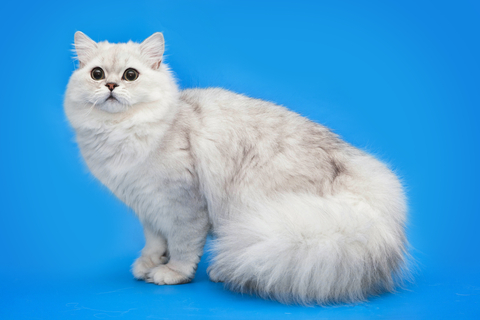 The body is medium to large in size, not much longer than the tail. A good ratio is for the tail to be 2/3 of the length of the cat. The chest should be wide and powerful. The hips have a flattened tip line and the body should be wide, yet muscular, when seen from above.

Legs are medium in length, with strong muscles and well-boned. The feet are large, round and well-knuckled. The strong muscular and bone structure and round paws may give the appearance that the legs are short. This makes the cat look stocky.

The tail of a British Longhair is wide, fluffy and of medium length, tapering only slightly. When the cat is relaxed, the tail should be carried at back level. 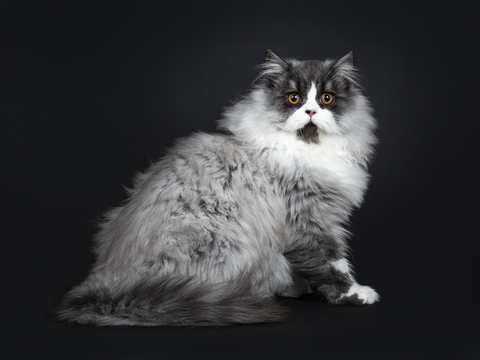 The coat of the British Longhair is classified as semi-long. It is beautiful - plush, double and very dense. It is soft to touch with a unique texture and wave. It is thick, fluffy, of medium length and with a well-developed undercoat that pushes the fur out from its body, giving is a plush, almost teddy-bear-like look when combined with the huge round eyes.

The coat can be of many colours - the British Longhair as a breed has one of the most expansive ranges of colors and patterns among cat breeds.

It takes over a year for the British Longhair kittens to develop a full coat and bushy tail. It may take up to three years for the males to “fill out”.

The coat can be patterned as bicolour, colourpoint or tabby (mackerel, spotted, classic and ticked), tortoiseshell, smoke, tipped / shaded, and colour point and white. All in all there are over 300 colour varieties.

Solid Colours: black, red,  chocolate, cinnamon , and diluted colours of these: blue, lilac, fawn and cream. Classic blue is the most popular colour.

Bicolour: Any coat colour with white. There are different varieties of bicolour. If a cat us “harlequin”, only 1/6 of the fur is coloured and the rest is white. “Van” has a high proportion of white colour. And “bicolour” has an exact balance of white and colour.

Colourpoint: only the extremities have colour: face, ears, legs, tail.

Tabby: there are several variations of the tabby-coloration: classic, mackerel, blotched, spotted or ticked.

Torbie: A mix of tortie and tabby

British Longhair Cat as a Pet

back to Longhair Cat Breeds