The British Longhair cat developed from the British Shorthair.

A popular theory of the development of the British Shorthair cat breed, from which British Longhair cats developed, tells how the Romans who brought cats with them when they invaded Britain and these were the ancestors of this  breed. The breed changed little during the centuries that followed. 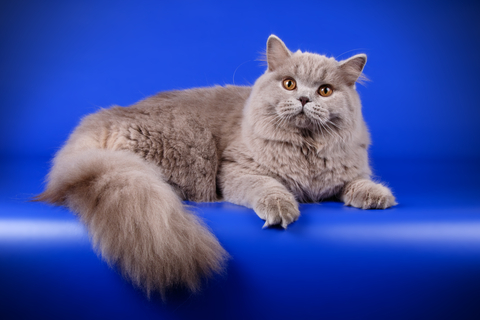 When Did the First British Longhair Cat Really Appear?

Initially the shorthair version of the breed declined in numbers because the late 19th century people were attracted to the exotic long-hair cat breeds.

The British Longhairs and Shorthairs

Short-haired Cat Society was established in Britain in 1901, and  took care of the breeding of the British Shorthairs as well.

After the First World War the GCCF (Governing Council of the Cat Fancy) declared that only third generation offspring of the British Shorthair / Persian crosses could be shown. As a result the breeding stock was diminished. As if this wasn’t enough, the World War 2 began.

The aim was to produce a stout and round-faced breed that would keep the short hair. Among the breeds used were long-haired cats such as the Turkish Angora and the Traditional Persian cat. Other domestic shorthairs were also used in creating the breed.

As the development of the British shorthair is tied to the early stages of the longhair breeding, it is an interesting fact to mention that during those early days the blue version of the breed consisted of two distinct types. There were on one hand the round-headed, sturdy and compact British, and on the other the elegant Russian type with its triangular head. These two types were interbred until they were finally separated into two unique breeds. 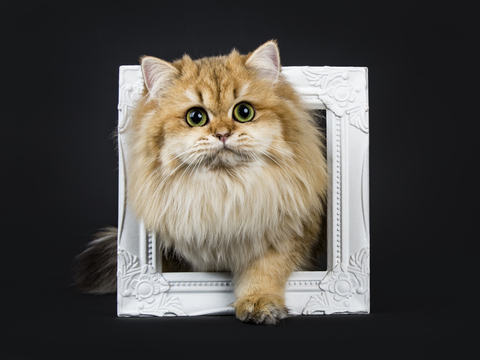 Of course the long-hair-genes produced many semi-long-haired kittens in the litters. Generally these were considered unwanted and sadly many of them were destroyed to preserve the original British shorthair breed type.

The British Shorthair acquire the TICA championship status in 1979, but the British Longhair only in 2009.

The breed is known with other names as well:

The term Highlander is sometimes used in connection with the British Longhair, but that term is already reserved to another breed of cat which is a development of the American Curl. Another term you sometimes see used in connection with British Longhair is Highlander Straight, but that is the straight-eared variant of the Highland Fold. These two Highlanders are thus long-haired versions of the Scottish Straight and the Scottish Fold.

British Longhair Cat as a Pet

Back to Longhair Cats

Picture of blue British longhair by Aleksandr Volchanskiy in Dreamstime.

Picture of British longhair kitten in a frame is by Nynke Van Holten in Dreamstime.