Ocicat cats may resemble a jaguar or a leopard, but this is an all-domestic breed. It is bred to have the exotic looks of a jungle-cat but there are no wild cats in the breed’s ancestry. It has a pleasant “tabby temperament” which has made it so loved by cat people. 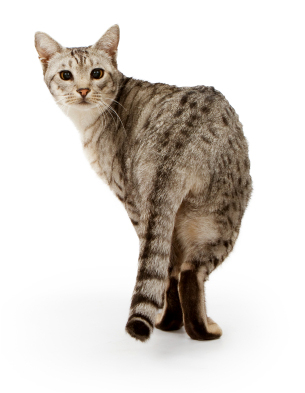 Despite its increasing popularity this is still a rare breed. True cat lovers swear byt its beautiful looks and character and it has been described to be the “cat of the connoisseur”.

Ocicat cats began as many other breeds did – when someone tried to create specific characteristic in another breed. In this case it was the owner of the Dalai cattery, Mrs Virginia Daly of Michigan, who was interested in hybrid crosses – and in this case she wondered if it was possible to create a Siamese cat with Aby-colored points.

Mrs Daly was an experienced cat breeder who had already managed to create the first Flamepoint Himalayan (by crossing a Red Persian with a Siamese), as well as chestnut, lavender, lynx and pinto Siamese.

Mrs Daly bred a ruddy Aby male (Dalai Teta Tim of Selene) to a seal pointed Siamese female (Dalai Tomboy Patter) in 1964. The result were kittens that had Abyssinian looks. Mrs Daly continued with her planned breeding, and a second generation of kittens were born. This time the female was one of these first half-Aby kittens (Dalai She), who was bred with a chocolate point Siamese (Champion Whitehead Elegante Sun aka “Sunny”).

Now this second generation produced an Aby-pointed Siamese, but also a pretty spotted kitten – an ivory colored male with golden spots and copper eyes. He looked so much like the wild Ocelot, that Mrs Daly’s daughter named him Tonga. Well, Tonga did not resemble any official breed description and so he was neutered and sold as a pet. 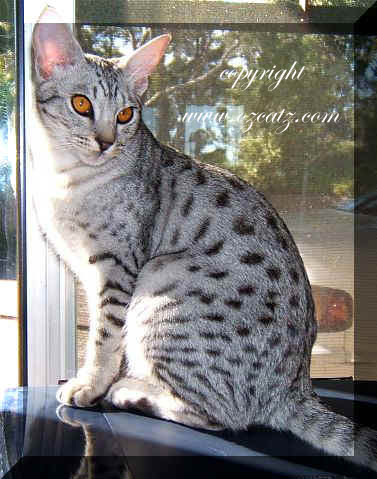 (Thank you, Ozcatz Cattery for the permission to use this photo of your beautiful Cheetah.)

Because he was so beautiful, he even had his picture published in a newspaper, and attended a cat show. He was allowed to be shown at the “Special Exhibit” section, where “breeds of the future” were shown. Now I do not know what the other cats were, but in case of Tonga, this was certainly true.

Mrs Daly mentioned Tonga to a geneticist, Dr Clyde Keeler. He was interested in producing a cat breed that would look like the Egyptian Spotted Fishing Cat, now already extinct. As Tonga was no longer available for breeding, Mrs Daly repeated the breeding that had produced Tonga, and this time a tawny spotted male was born. Mrs Daly kept breeding Tonga’s parents and more spotted kittens were born. At this point the thought of developing a whole new breed arose.

Tonga’s full brother, tawny Dalai Dotson was used in breeding and the Ocicat cats were officially launched as a breed of its own. At first it was called Accicat and Ocellete, but soon Ocicat took over as the new breed’s name. It was described as reincarnation of Egyptian Spotted Fishing Cat. It was also described as resembling the Indian Desert Cat and Indian Fishing Cat, which were said to be very old breeds, even the ancestor of all domestic cats.

Because of private matters Mrs Daly could not concentrate on the breeding of Ocicats for eleven years, but after this the number of the breed has steadily grown. Other breeders were developing the breed also. They bred Abys to Siamese and these kittens to Siamese again. The result weresix colors in all.

In 1967 the breed was accepted for registration at CFA. When the parent breeds were written down, a mistake was made, and American Shorthair was mentioned. Because of this breeders started using silver tabby American Shorthairs when breeding Ocicat cats. Because of this the body type developed from a “Siamese” type into a more sturdy direction – the bones became larger and the whole breed became bigger in size. Also the silver color appeared and the spotting became more uniform.

After 1986 Siamese and American Shorthair outcrosses were no longer accepted, but Abyssinians were used to diversify the gene pool.

The breed was officially accepted in the 80’s, and it was only at the end of the 80´s that first Ocicats came to Europe. Click here to find out what Ocis are like as a family pet!

(The copyright of the Ocicat photo at the top of the page belongs to adogslifephoto at www.istockphoto.com, do not copy)

Have your say about what you just read! Leave me a comment in the box below.
[?]Subscribe To This Site