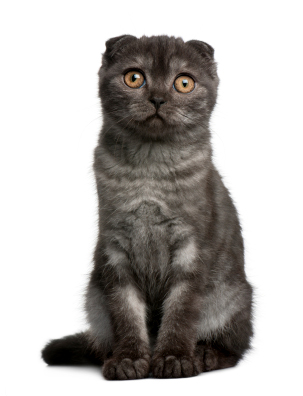 If you have ever seen Scottish Fold cats, you understand why it is called the owl-cat. Or otter-cat. Or teddy-bear-cat. Or the Buddha-cat (the explanation is below). And you probably came up with a few nicknames yourself.

A Scottish Fold cat simply looks adorable. Its looks are absolutely endearing. Huge round, slightly sad-looking, innocent, loving eyes under floppy ears that bend forward and down on the round head so that at first it looks like there are no ears at all. The whole cat is round and cuddly and doesn’t mind being cuddled . In fact it has been known to have worked as therapy cats because of its sweet disposition. And if you heard that tiny meow, I’m sure your heart melted.

It may be there had been other lop-eared cats in Scotland before, but it was Susie, a white floppy-eared cat who first drew the attention of a cat fancier back in 1961. This happened in the Pertshire disctrict of Scotland, near Coupar Agnus. A local shepherd, William Ross, noticed an odd-looking white cat on a neighbor’s barn yard. This beautiful “pixie-faced” cat had floppy ears that folded forward and down. Mr Ross mentioned what he had seen to his wife, who already was a breeder of Siamese cats. Being cat fanciers they were both so intrigued by what he had seen they visited the neighbors – the McRaes.

Upon inspection they concluded that Susie’s ears had been spontaneously mutated – Susie’s mother was a normal white straight-eared cat, and the father was unknown as was usually the case when it came to “barn-cats”. The McRaes promised they could have a floppy-eared kitten, should there be one among Susie’s kittens. And as it happened, there were two. The Rosses took the white fold-eared kitten and named her Snooks. The other kitten was neutered and Susie was killed soon after by a car, so the breed nearly never happened… 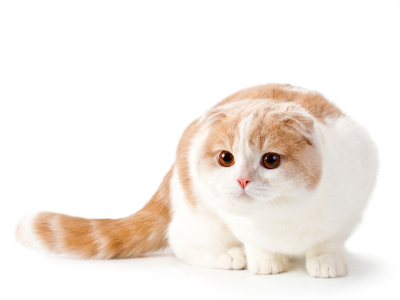 Next Snooks bred with another British Shorthair, this time blue, with the royal name of Ryeland’s Regal Gent, and there were two folds in that litter.

The Rosses decided to register their floppy eared kittens and chose as their cattery name “Denisla” – the rivers Den and Isla near their home being the inspiration to the name. At first they called the new breed “Lop-eared cats” or just Lops for short. (There was a rabbit breed with hanging ears called lop-eared rabbit, so the original choice of name for the breed was logical.) At the end of the 60’s the name was changed to Scottish Fold.

Probably because of the many white cats in the breeding line at the very beginning there was suspicion (later proved to be unfounded) that Scottish Fold cats had problems with their hearing. The white-coat gene, however, is known to cause deafness in all cats, not just Scottish Fold cats, but still it is sometimes hard to get rid of this rumour.

At the early stages of the breed’s development a geneticist, Pat Turner, who helped in the development of the breed, came to the conclusion that the gene mutation causing the folded ears was simple dominant. This means that if one parent has the fold gene and the other one doesn’t, then approximately 40-50% of the kittens born will be folds. (When the average litter size is five, there are long waiting lists for the fold kittens, especially if a special color is wanted.)

The fold gene causes a fold in the ear cartilage, and so the ear bends forward and down. Each kitten is born with straight, unfolded ears. If there is to be a fold, this begins to show at three weeks of age: the ear begins to bend from the outer edge, near the base of the outer ear which is also called the pinna. There are different degrees of the fold, and the quality / degree of the fold can be determined at about three month’s age. 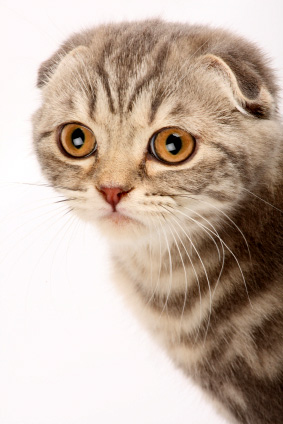 Kittens with no fold are called Scottish Straights (the straight ears are also called perk ears). The straight-eared Folds are still valuable to the breeding program, because they do carry the fold gene. If you are interesting in Scottish Fold cats and are planning of getting one, remember these straight eared cats have just the same sweet character as the ones with folded ears.

Despite their flat, folded ears the Scottish Fold cats use their ears to express themselves. They follow sounds by turning their ears like any cat. Their ears “prick up” also – just you try to sneak to the fridge without the cat knowing and you will see this… If, of course, you have managed to sneak anywhere without your Fold following you. (Not likely to happen)

A cat flattens its ears when it is angry or defensive, and Scottish Fold cats do this too. However, if you get a Fold and you already have other cats, supervise their getting acquainted as the other cats may at first misinterpret the position of the Folds ears and think it is angry or defensive. After a while they realize this is not the case and the newcomer simply is a bit different. The Folds get along famously with other cat breeds.

The temperament of the Scottish Fold cats is very sweet and loving. They become very attached to their humans (and usually choose one favorite) and are very loyal to their family. This trait has of course made them very popular as a pet.

This is a very affectionate breed to their owners, but like any cats the wish to show their affection in their own adorable, quiet ways.

Scottish Fold cats are not always lap cats as such, but they are definitely “people cats”. Of course there are some Folds who want to spend time in your lap to the extent they won’t let go even if you stand up (ouch), but mostly they prefer just to be near you and supervise everything you do.

If you want a cat that keeps you constant company, then the Scottish Fold is your choice. You will notice it follows you around – you don’t have to run after this pet to get its attention… They consider it their pleasant duty to be with you all the time and you may notice that they wake up from deep sleep just to follow you if you leave the room. Some have compared this behavior to that of dogs almost. Still, don’t be fooled by their quiet demeanor – they are real personalities and can be a bit stubborn when they have set their minds of achieving something (like your attention).

This cat has a very laid-back personality (the long-haired Folds are said to be even more so). They get on very well with other animals (and obviously enjoying their company) and people thanks to their calm nature. They adapt well to changing situations and are good to travel with. They don’t get panicky in new surroundings. 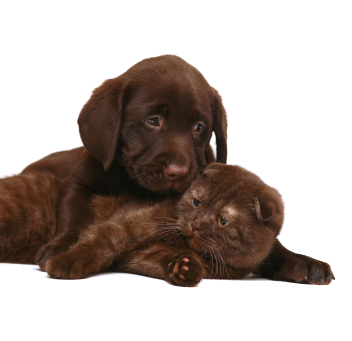 This makes them ideal for any kind of household really – both families with children and adult household. Just bear in mind that if the cat has to stay alone for long periods of time, it does not like it. It is a social creature, so if you know you or your family cannot give it all the attention it needs, why not get two Scottish Fold cats? (Well, once you get one, you are bound to want another too…) Because of their love of people and attention they make very good indoor cats.

The Scottish Fold cats get along well with children and are known to have been carried around by kids like a purse, not minding one bit. Still, always remember to supervise your children with cats and teach them the proper way of respecting animals.

This is an intelligent cat breed, they are good problem solvers and always interested in new experiences. They may enjoy car rides (remember safety in car – do not allow your cat to be loose inside the vehicle).

Scottish Fold cats are not loud – they have very quiet, almost tiny voices and are very soft spoken. But if you really listen to them, you notice they have quite a range of meows (and purrs) and their “vocabulary” is quite special and different from other breeds.

This is not an overly active breed, but they do love to play – and expect you to be involved. They keep their playfulness well into adulthood. It is not unheard of to train your Fold – they often learn to fetch, for example.

One endearing habit these cats have is the way they often choose to sit – they sit on their backside, stretch their hind legs out and cross their front paws on their belly. This position is known as the Buddha position for the very obvious reason. And so, of course, the Scottish Fold is also called the Buddha Cat. It can be a rather hilarious sight with a person sitting on a sofa, watching TV and a Scottish Fold sitting right on the same couch in Buddha position like it was watching the telly also. (Well, it might, you never know!)

They also like to flop on their backs and fall soundly asleep with all four digits in the air. (You know the position – you really have to restrain yourself form rubbing their tummies when they lay there all content and blissful. Not that they would mind that much if you did, but let sleeping cats lie…)

They are not very interested in high places and don’t find jumping on furniture overly interesting, so if you like ornaments and cats (usually an impossible combination), with a Scottish Fold cat you may have a chance of keeping your collections unbroken.

And if you wish to keep your couch completely to yourself, you might persuade your Scottish Fold of the fact with the help of

Taking care of a Scottish Fold is pretty easy – this breed does not require bells and whistles to enjoy life. Still the Folds need and thrive on love. So be prepared to give lots of it.

This is one cat who loves to be at home during dinner time, which makes it prone to obesity. So no munchies even if those pleading sad eyes try to convince you no one ever feeds the cat… If your Scottish Fold already is a bit rounder than it should, you might consider giving low fat cat food . Read more about the looks, care and important health information about the Scottish Fold cats by clicking here! 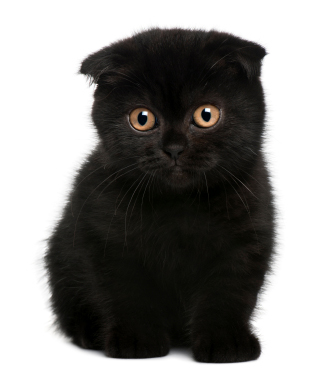 Do You Have Scottish Fold?

Do you have a great story about a purrsonality of a Socttish Fold? Tell us about it!

Photo of red and white Fold is copyrighted by dreymedv of iStockphoto. Do not copy.

Portrait of Scottish Fold kitten is copyrighted by kipuxa of iStochphoto. Do not copy.

If you wish to share a story
and read what others
have said about their Folds,
click here!