The Maneki Neko cat, or the Beckoning Cat is also called the waving cat, because in the Western culture it looks like it is waving instead of beckoning. But this impression really is matter of cultural differences. In the west people beckon someone to come py turning the palm of their hand towards themselves and then moving the hand towards themselves, and turning the palm outwards is waving goodbye.

In Japan, however, beckoning is done by holding the palm of the hand outwards and then folding fingers down and up, down and up… And this is exactly what the Maneki Neko cat is doing. 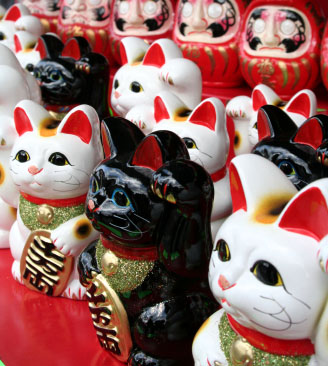 The most common belief is that if the Maneki Neko had the left paw raised, it is beckoning in more customers. There is an old belief that a cat feels the rain coming and starts to wash its face. And how does this connect to more customers? Well – logical, in a way. If it starts to rain, people look for shelter and come into shops and restaurants. And while there, why not buy something?

And the right paw raised has its own meaning too: it is to bring in good luck and wealth.

So to be on the safe side some prefer Maneki Nekos with both paws raised. (Logical, I suppose.)

The height of the paw has meaning too: the higher the paw, the greater the luck. Also it is believed that the rised paw measures from how far the good fortune comes. The oldest Maneki Nekos don’t have their paws very high, so it is a rough dating system for a Maneki Neco cat statue too.

The beckoning cat statues are made from all sorts of materials. ceramic, paper mache, gold, jade…

The paper mache versions were originally made for the poorest people out of layers of Hariko paper, each layer varnished and the final result was then painted. These were called the Hariko Maneki Nekos.

In modern times it became possible to use batteries and so battery-operated waving prosperity cats appeared. These are mostly made of plastic.

The cat has some ornaments also: a ribbon or scarf around the neck, bells, often a bib, a coin…

The red collar with bells may be a reminder of what the cats wore in the Edo period. Ladies of that time decorated their cats with red collars made of chirimen-flowers and small bells to help them track their cats.

The bib on the other hand, is related to a divinity Jizo (Boddhisatva). This divinity protected sick and dying children. If a child recovered from an illness, the parents placed a bib on Jizo’s statue as a thank you. Maneki Neko was also believed to avert evil and illness, so the bib appeared around its neck too.

The gold coin the Maneki Neko cat holds, is the “eban” which was used during the Edo period. At the time it represented a considerable sum of money (estimated one thousand dollars).

People also leave small coins to Maneki Neko statues for good luck – much like we toss coins to a fountain or a wishing well.

Because its connection to money and coins, Maneki Neko-shaped piggy banks are popular.

The colors of a Maneki Neko cat are also meaningful. 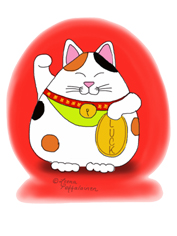 Calico or tri-color - this is the luckiest color of them all according to the tradition. (Usually calicos are tri-colors, and males are very rare. Perhaps this is the reason why male calicos are considered to be even more lucky.)

Black wards off evil and is especially popular among women as it is believed to ward off stalkers. Unlike the western culture, Japanese consider black cats to be bringers of good luck.

Red is the color of love and marriage, also protection from illnesses and inviting good health

Orange color has the same meaning as red.

Pink is not a traditional color for Maneki Nekos, but has become more popular because its obvious connection to love and romance.

Gold is the color of riches and prosperity.

Green stands for good health, but also for good education.

But whatever the material or color, the cat is placed by the doorway or cash register to bring in good luck and prosperity to a shop owner (the cat may hold a scroll with the text “Please enter, you are welcome!”). In private homes the cat can of course be placed where ever it looks nicest.

The Maneki Neko has been very popular in Japanese art for a long time already. The earliest documents are from the 1870’s. Even more Maneki Neko cats began to appear during the Meiji-period (1868-1912). Maneki Neko figures were distributed in the Osaka area already during this time. But the real popularity boost came at the beginning of the 20th century – and has increased ever since. The famous Hello Kitty is a form of Maneki Neko also.

I am sure we cat-lovers understand this popularity very well. If only there was more space …

If you have a Maneki Neko cat collection and wish to show your photos, or tell a stoyy how a Beckoning Cat gave you good luck, you can do so here!

Do you have a great story about Maneki Nekos? Do you collect them? Did a Maneki Neko bring you good luck? Share your story and show a photo of your Good Luck Cats!

What Other Visitors Have Said

Click below to see contributions from other visitors to this page...

Back to Homepage from Maneki Neko Cat Looks

The photo of a group of Maneki Nekos is copyrighted by Tweetlebeetle in iStockphoto. Do not copy.

The photo of the calico Maneki Neko in black background is copyrighted by Danbooth in iStockphoto. Do not copy.

If you wish to show
photos of your
Maneki Neko collection
or tell a story
how a Maneki Neko
brought you good luck,
click here!