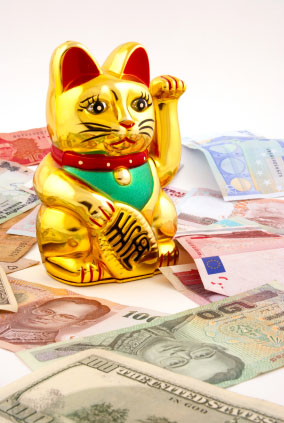 Have you seen a small figure of a money cat - an oriental-looking cat with a paw raised? If you have, then you have seen a Maneki Neko. It is thought to bring good luck to its owner. But do you know the story behind this lovely little ornament?

The word Maneki means beckoning or inviting. And the word Neko of course means cat. So, this little cat is called the Beckoning Cat and it represents a Japanese Bobtail cat with its paw raised. In Japan people so believe in this good-luck cat that many of them would not dream of having a business without one.

Other names for this lucky cat is the Welcoming Cat, the Lucky Cat, the Money Cat, the Fortune Cat and the Happy Cat.

Maneki Neko’s origin is far in history – and there are several versions as to how Maneki Neko came about. Still, what is common to all of them, is that a cat wanted to help people.

Perhaps the best known of all these stories is the following:

Tama was a Japanese Bobtail cat, taken into a Buddhist Kotoku temple in 1615 by a monk. The temple in question was very poor, but the monk shared his food and took good care of the cat nevertheless. One day he sighed, tired of the poverty, that if only the cat was human, it could do something to help the monastery.

One day lord Naotaka Ii (1590-1659, the feudal lord of the Hikone castle in the Shiga area near Kyoto) rode by with a group of Samurais after the siege and victory at the Osaka castle. A storm broke and the men took shelter under a tree opposite the temple entrance. As it happened, Tama the cat was sitting in the doorway and raised his paw. The lord got curious, because it looked like the cat was inviting him to enter the monastery. So he went to the cat and as it turned, he followed it into the monastery. At that very moment a lightning struck the tree under which he had taken shelter. Lord Naotaka Ii was certain the cat had wanted to save his life and returned the favor by donating generously to the monastery. He made the temple his family temple and renamed it Gotokuji. The Ii family made sure the monastery remained prosperous and when Tama the cat died, it was considered the symbol of the Goddess of Mercy, and buried in a cat cemetery within the monastery. They also had a statue made of Tama, with a paw raised as if to beckon.

In time the story of Tama spread, and people began to connect the image of a cat with a raised paw with good luck and wealth and wanted to have such good luck statues for themselves. They believed it was a true Money Cat, bringing them wealth and fortune. And this is how the statues of Maneki Neko were created.

Later, in 1697, the monastery was enlarged to a temple. You can visit Gotokuji temple even today, it is in Setagaya area to the west of Tokyo. Tama’s grave is still there, surrounded by Maneki Neko statues. If people have lost their cat or their cat is ill, they come to this temple and put prayer boards up with images of the Beckoning Cat.

The Gotokuji temple walls are even today covered with paintings of Bobtail cats.

There is another version of this monastery story where the nobleman went to see what the cat was beckoning and saw an ambush waiting for him nearby. Thus the cat had saved him from a trap and he paid his debt by helping the monastery that was the cat’s home. 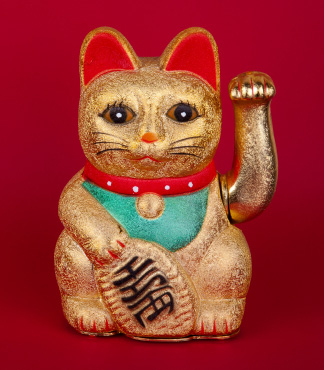 One version of the Maneki Neko story is that there lived a very poor, old woman in the Imado area in Japan (to the east of Tokyo). In her extreme poverty she had no choice but to sell her beloved cat so she could get some money to buy food. She was very sad about this. One night she had a dream where the cat she had sold appeared to her in a dream. The cat told her to make an image of it out of clay. She did, and the little statue caught someone’s eye and they wanted to buy it. She sold it and made another. That one was also sold. Yet again the old woman made a statue. One after the other the cats were sold and eventually she became rich. Did she ever get her cat back? The story doesn’t tell, but the cat proved itself to be a real Money Cat.

Money Cat / Maneki Neko – the Geisha and the Snake

There was a famous geisha Usugumo, who lived in the Yoshiwara district in eastern Tokyo. She was known for her great love of cats, and she of course had a pet cat always with her. One day the cat lifted its paw and pulled at the geisha’s dress. No matter what it did not let go. The geisha’s companion thought the cat was a goblin cat (one that can take possession of a person) and drew his sword. He cut off the head of Usugomo’s cat and it flew through the air and to the ceiling, killing a poisonous snake that was of the ceiling beams above the geisha. None had noticed the venomous snake which was ready to strike.

Usugomo was distraught because the cat had only been trying to protect her and was killed for it. Someone made her a wooden statue of her cat with paw raised and this cat became a symbol of protection.

And yet another story on how Maneki Neko was created:

In 1816 there was in Japan a fishmonger, who daily visited a money lender. He always brought some fish for the lender’s cat and of course became friends with it. Then one day the fishmonger got sick and could not do his work. He was worried about his livelihood but could do nothing but stay in bed. He went asleep worried. The next morning when he woke up, there were two gold coins next to his bed. And each morning there were gold coins. The fishmonger thanked for the miracle as it gave him a chance to get well and eat too.

When he was well again, he visited the money lender and brought some fish for the cat, as he had always done. But the cat was nowhere to be seen. He asked where the cat was, and the money lender replied he had killed the cat because it had stolen gold coins from his purse.

The fishmonger told about the mysterious gold coins that had appeared each night next to his bed and they understood it was the cat who had tried to help a friend in need. Now the money lender regretted killing the cat. He understood it had only tried to help and a tomb stone was built for the cat. The stone told of an animal who did “virtuous and good acts”.

If you wish to read moer about the looks of a Maneki Neko cat, click here! 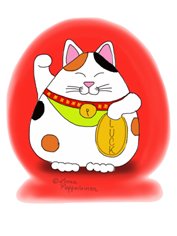 Photograph of maneki neko with money is copyrighted by Hemeroskopion of iStockphoto. Do not copy.

Photograph of golden maneki neko on red bakcground is copyrighted by RecoveryPhoto of iStockphoto. Do not copy.

Want to show
photos of your
Maneki Neko collection
or tell a story
how a Maneki Neko
brought you good luck?
CLICK HERE