The story of the Balloon Cat is something I learned about only after it happened.

So, one day I was studying the SCC, trying to find the section on how to stop humans from going to the place they call Work, and stay home instead and pet and feed us.

Somehow I ended up in the Real Life Experiences section – RLE for short – and suddenly I found Mommy’s and Daddy’s name mentioned under an interesting headline Heppu the Balloon Cat.

Of course I had to learn more.

This particular story of Heppu the Balloon Cat was told as a dire warning against light-hearted playing. There are dangers everywhere and a cat needs to be on guard all the time, as this story reveals.

It was told by Heppu the Balloon Cat himself. (No, not Hippu, but Heppu. It is purely coincidental that Hippu's name resembles that of Heppu so much) I had heard of him before, from what Mommy and Daddy have been saying, and as far as I understood Heppu was a bit of a yokel. (Now I do apologize for the term, it is not mine, but something I heard mentioned.)

Heppu the Balloon Cat was born and raised in a barn. He survived the neighbor’s vicious hunting dogs with the help of his Mom who dangled on their snouts will all her claws when they came to kill the kittens. The human Daddy of that house heard the racket and ran to rescue with a broomstick. The dogs got good riddance, the kittens were saved, but I am sure this scare had its lasting effect on poor Heppu.

He was always a bit… simple, you might say. Scard out of his wits, some say, but I do not wish to put it so harshly. 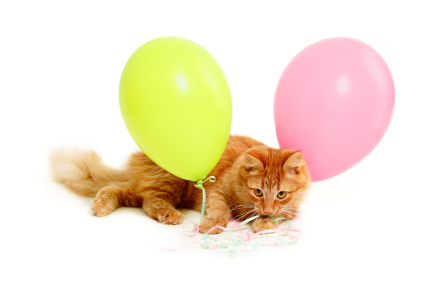 When the balloon attacked the cat... Heppu the Balloon Cat in Cat Diary

So, he may not have been the sharpest crayon in the box, but he was a good and loyal cat to his humans for all the sixteen years of his life, took good care of them and they loved him with all their heart. A match made in heaven, really.

One day, when Heppu was still quite young, there had been a party in the house. And as parties go, there were balloons. You know the kind the humans fill themselves by blowing air into them, not the kind that rise through the air.

The balloons had been attached somewhere, so there were still long strings attached to them. And we know how it is with cats and strings. A cat cannot resist strings in any form.

Daddy started playing with such a string and Heppu played along. He rolled on his back and tried to catch the string with all is paws. And so, somehow, he managed to get his back legs entangled to the string.

Now Heppu, like I told you, was a bit of a scared yokel and when he realized something slithery and obviously very dangerous was restricting his movements, he panicked. His pupils dilated to two big black saucer-sized circles and for a split second he became totally stiff.

That was the only time Heppu’s Daddy would have had a slight chance to stop the chain of events.

Well, humans are not that fast in their movements and so Heppu levitated into the air and to the next stage of panic before anyone realized what had happened.

What do cats do when they meet a danger they cannot handle? Yes, quite so. They run. As did Heppu. He was certain it would take only a step or two to get rid of the dangerous snake around his back legs, but what he had not taken into account was the balloon. The horrid yellow balloon…

You see the string was entangled in such a way the balloon was right next to Heppu’s… errr, how to say this… crown jewels. He was still so young he was unaltered, which should explain what I am trying to tell you.

So Heppu took two quick steps and something horrible and yellow patted him right on the…jewels. Patpat.

If possible, Heppu’s eyes dilated even bigger – they were positively bulging out of his head at this stage.

He looked back and a big yellow monster sneered back (I do not know whose idea it is to paint that smiling face on yellow balloons, but I have heard Forrest Gump has something to do with it. Bad idea, Forrest, bad idea).

That was it. Full blown horror, utmost panic! The only way out was a berserk run. Anywhere. And NOW!

And Heppu ran. He ran so fast he was very close to breaking the sound barrier.

Through the hall patpatpat (not a very big hall, that).

Mommy saw the whole thing and even though it took her quite some while to catch her breath and stop howling with laughter (quite inappropriate, I’d say, considering the horrow Heppu was experiencing), she later often told what she had seen.

It took about three steps from the living room doorway for Heppu to lift off the ground. Now mind you, he was still very young an agile, but I still say it is quite an achievement to be able to run around a room without once touching the floor. Running on the walls requires extreme speed, but Heppu was quite near in breaking the sound barrier, as I said.

Epilogue to Heppu the Balloon Cat

It took Mommy and Daddy two days to convince Heppu the horror had passed.

In SCC Heppu the Balloon Cat told he had never been so embarrassed in his life. But he knew cats had obligations towards one another and proved himself the better cat by revealing his humiliation to others so they might avoid similar situations.

He was awarded a medal of honor for this, which healed his self respect a little. Still, he was called the Balloon Cat for the rest of his life after this.

So if you humans wonder why your cats are not overly interested in balloons, they have probably read the story of Heppu the Balloon cat. We, the cats of this household, would not even look at a balloon. But we have to say Mommy and Daddy never bring balloons inside anymore. They also learned their lesson. I hope Heppu can now laugh at all this on the other side of the Rainbow bridge. I just hope there are no balloons there and no one calls him the Balloon Cat anymore...