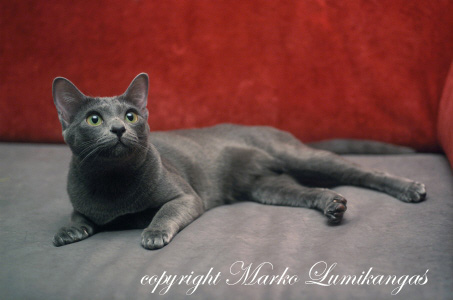 Perhaps the most striking feature of a Korat cat are those huge green eyes – they are really big and accentuated by a bony crest that goes from one cheek bone and over the eyes to the other cheek. This same crest gives the impression that a Korat has a heart-shaped face. The overall effect is truly beautiful.

And the next thing you notice about the Korat cat is how the light reflects like silver from its grey coat. The Korat has a single coat – there is no undercoat. For this reason the fur lies close to the body and doesn’t shed much. You’ll notice that when you pet a Korat, the fur does not float off. This may be one of the reasons some say a Korat does not cause as many allergic reactions as some other breeds (still, if you are allergic, and consider getting yourself a Korat, do ask the advice of your doctor).

Korat’s fur is from short to medium in length and amazingly soft to the touch – the word “silk” has been used. The grey color can vary in lightness, but all shades have the silver tipping. The base of the coat is light in color, then darker in the middle and each hair is silver-tipped. This gives the Korat cat its beautiful sheen – it gives an almost halo-like effect, which is especially visible in the sunlight, and in the areas where the coat is shorter, like the legs and face.

The Thai say that the color of a Korat’s coat is like clouds before a thunder storm, and call the silver tipping “sea foam”. (How beautifully poetic!) And in the US this effect is referred to as the “silver dollar shine”.

Each Korat is born silver blue, and this color remains all though it s life. However, a Korat is a slow-developing breed and this silver tipping becomes more pronounced with age. So, like wine, the Korat gets even better when it gets older. 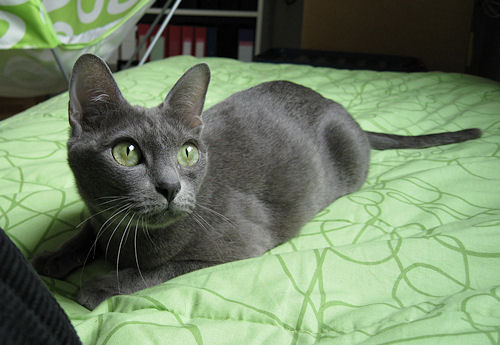 A Korat cat should not have any tabby markings in its body. The kittens may have some “ghost tabby” markings, but these should vanish with age.

A Korat cat’s body resembles that of a Siamese – its bone structure is delicate, its head is wedge-shaped and its has very large ears.

One of the Korat’s distinctive features is the heart-shaped head and face – this feature becomes more pronounced when the cat ages. It is said the head has three hearts: first the heart you can trace from chin to ears and back. Then the heart that is formed by the muzzle and the crest around the eyes. And then also the nose – which is slightly heart-shaped. The fur on a Korat’s chest can also be seen to form a heart.

The forehead is flat and large. The profile is well defined and there should be a slight, but clearly visible stop between the nose and forehead. The nose itself has a slight downward curve just above the leather, almost giving a lion-like effect. The nose should not be too short or long, or else the double-heart head does not look right.

The chin and jaw are well developed and give a strong impression.

Photographs on this page are copyrighted. Do not copy.

Mommy sometimes talks of something her family did when she was a kitten (or child, as Purrsons choose to call their offspring). Namely window shopping.

She tried to explain this to her god-children. Being a god-parent means that the Purrson who is such a thing, is allowed to carry the child of a friend off from trouble by the neck, until they are adults.  And teach them the morals of being a Purrson. The parents give them this right in a formal ceremony. A wise tradition in my opinion.

But anyway. When she mentioned they went window-shopping, the children asked did she not have a Mac, and what would she need Windows for.

She had to elaborate: window shopping happened when there were no shopping centers or malls. Shops were spread along the city streets, each showing their merchandise at their window.

The shops were not open all through the weekend when she was young. (Upon hearing this I heard the god-children mumble something about Medieval times. Not sure what that is, have to find out about them later.) They closed in the early afternoon on Saturday and did not open until the next Monday.

There wasn’t much on the picture box (or TV as Mommy calls it), as they only had two channels. (The god-children extended their mumbling to dinosaurs, which I understood from the context to have existed before the Medieval times).  Also, they had no computers. (The god-children no longer found words). So, they all hopped into the family car (or rubber-paws, as we call it) and drove to the center of the city.

There they just walked the streets, looking at the displays at the shop windows. Clothes and electronics mostly. I never remember Mommy mentioning a grocery store, odd as it is… And then they returned home, dreaming about the things they would like to have one day.

You know what? We do the very same thing! Yes, us, the cats. We sit at the window of the house, and we window-shop the birds and squirrels outdoors. We have nicknamed the birds as flying meatballs, and the squirrels as fluffy-tailed rats. Both very yummy, I am sure. But alas – just like Mommy as a kitten, we cannot get what we are looking at through the window. But we dream…  And swear aloud in kitty language to the delicacies outside for being out of our reach. It is good the human’s don’t understand the language…

Though I am not without merit in this issue… I have actually caught a bird. Twice. Daddy opened the door to the balcony without noticing there was a bird inside. And it could not escape because of the chicken wire fencing they had put there. (Thank you!) If Daddy was asleep when he opened the door, he was not after the five seconds it took me to catch the birds. Nor was the rest of the house. Amazing how much noise falling furniture can make.

But anyways – we have found similar behavior in Purrsons and cats. I shall keep on researching, maybe we find something more!