The History of the Singapura Cats

The Singapura cats appeared as a recognized breed not so long ago, but during its short existence this, the smallest of cat breeds, has already won the hearts of cat lovers.

Imagine a fish market in Singapore… Fishermen, boxes of fish, boats, lots of noise and people. Suddenly you see a little figure of a cat dash out of nowhere and quickly snatch a bite to eat, disappearing before anyone stops it. A tiny cat, so small you wonder if it is even fully grown. But if you would see where it goes, you’d find it has kittens of its own.

(Thank you, Spookipawz Singapuras for the permission to use your photo here.) 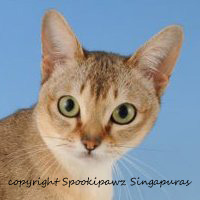 The Singapura cats came from such surroundings – the drains and shores of the Singapura river. Little beautiful bandits always on the lookout for food. It was a feral cat, which the locals called the drain or sewer cat, because they took shelter in the dry drains and culverts of the city during the dry season. These drains were not always very big, but neither was this tiny cat – perhaps nature favored the smaller cats, who found hiding places for themselves and their litters easier than the bigger ones.

Life is harsh for a feral cat, and all the more so in a small island off the tip of the Malay peninsula in Southeast Asia - here the cats have to share their habitat with five million people. So it may be that the tiny size of the Singapura is a result of poor nutrition. But whatever the case, the harsh environment made this cat into a harsh little survivor.

These little ticked cats have been in Singapore for decades, perhaps even for centuries, but they are rare even today. It is estimated only one cat out of a thousand feral cats have the breed characteristics – and even then they often have bobtails, a trait that may pop up in the breeds litters even today (even though it is a rare occurrence).

Many people say they only see tabbies in Singapore, and no Singapuras, but it is good to remember the ticking coat is really a tabby coat that is missing the patterns. So genetically it is quite logical to find ticked, patternless cats amongst the normal tabbies.

It is believed this breed is a natural breed, developed on its own before official breeding programs were created. 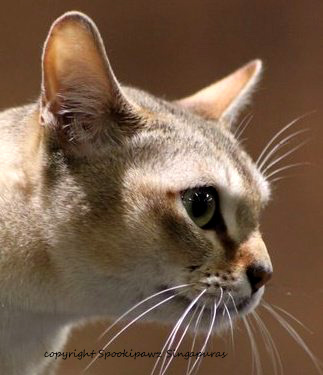 The Singapura is the smallest of all recognized cat breeds (it has been featured as such at the Guinness Book of World Records), but it is not a dwarf or miniature cat (it is slightly bigger than these). It just is a naturally small breed, beautifully proportionate. Still it is a surprisingly heavy cat, considering the small size, and this is because is because of its muscular stature. (Another small and heavier-than-it-appears cat breed is the Korat).

(Thank you, Spookipawz Singapuras for permission to use your beautiful photo here.)

The look of the Singapura cats make you first think you are looking at a small, pale colored Abyssinian cat. Still, if you look closer, you will notice the conformation is completely different from the Aby (with the exception of the big ears). The cat has a warm ivory undercolor, and a ticked coat where each hair has at least four bands of color – lightest near the skin, then a dark band, then another light colored one, and the tip of the hairs is again dark. There is no ticking on the underside of the cat. The insides of the front legs have bars, as do the back knees.

There is some controversy about the beginnings of the breeding program of Singapura cats, and in a hearing of the CFA the following story was told. Tommy and Hal Meadow, from the US are the founders of the breed.

In 1971 Hal Meadow was working for an oil company in Singapore, and found the first three cats showing the breed characteristics of the Singapura cats. He took the cats with him upon returning to US, but as his job was of a rather sensitive nature, they did not want to tell he had been to Singapore at the time and so they never told they got these cats from Singapore. So the cats were exported without official paperwork. In the US they were allowed to breed and got litters. Then, when Tommy and Hal both later returned to Singapore, they took the three grandchildren of these original cats with them.

In the customs Tommy was asked what the cats’ breed was. As they were of no official breed yet, and she had to state something, she said that they resembled Abyssinians. In addition to these three cats they had two Burmese cats with them – one already neutered and another spayed a bit later.

So, the Singapore customs labeled the three Singapur cats as Abyssinians, and the Burmese as Burmese. Later, upon leaving Singapore again, the very same cats that the customs had labeled Abyssinians, were labeled Singapuras, because Tommy and Hal had started the official breeding while in Singapore and given the breed its name. These first three Singapuras were a male, Ticle of Usaf, and females Tes of Usaf, and Pusse of Usaf. In Ticle and Pusse’s first litter were Usaf’s George and Usaf’s Gladys, who also came to US with Tommy and Hal when they returned. These five were the foundation cats of the breed.

But because of this “Abyssinian” and “Burmese” labeling of the cats upon entering Singapore gave rise to the story that this cat was a hybrid of these two breeds. There are but a few genetic differences between the Singapura and the Burmese, so there may be some mixing of the breeds in the past – but considering what a crowded environment Singapore is, it would be no surprise if the wild Singapura had some Burmese genes. Also the brown gene of the Burmese comes from these parts of Asia. 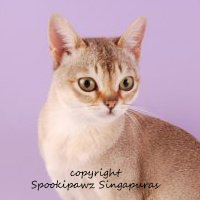 Also the Southeast Asia has the highest concentration of the agouti (or the “ticked”) gene. It is considered to be the original gene pool of the ticked tabby cats. And when you combine the brown gene to the ticked gene, you get the unique color of the Singapura.

This agouti gene is often found in wild mammals, so it is really nothing new under the sun.

(Thank you, Spookipawz Singapuras, for permission to use your photo here.)

Despite this slight controversy of the breed’s origin, the CFA saw no problem in this explanation and the Singapura cats have been accepted in most breed organizations as a natural breed.

Also, in the 1980’s another cat, Chiko, was found at the Singapore SPCA, and imported to the US and into the breeding program. She was a living proof of naturally developed Singapura cats – only her tail was different. It was lucky for the breed she was still unaltered when she was found at the animal shelter, and that she was allowed to leave the country unaltered. She was a valuable addition to the breeding program.

Later several other Singapura cats were brought to US from Singapore by Gerry Mayers, and even though they were not accepted to the CFA registration, their offspring have now appeared in official circles, thanks to their “five generation pedigree”. This is a good thing because the original gene pool is rather small and the breeding program has to be carefully considered. There has been talk of outcrossing to diversify the gene pool, but so far this has not been done.

Tommy and Hal Meadow actually did a huge service for the Singapura. In Singapore the feral cats were considered a nuisance and severely dealt with by the Singapore officials. Tommy and Hal managed to rescue these beautiful cats out of Singapore before the controlling of the cat population started for real. Without them this breed may have become extinct before anyone knew about it.

The Singapore Tourist and Promotion board STPB woke up to the fact that the Singapura cat breed was winning the love of people the world over. They campaigned to use the Singapura as a national mascot and a national treasure in 1991. The cat became the official symbol of Singapore along with the merlion (a lion-headed fish). It got a local name too, as a result of a competition to discover a new name for the breed. This new name was Kucinta – “love cat” or “cat of love”. "Kucin" (or kuchin) means cat, and "cinta" means love. The name could also be translated as the “sweet little cat” - the perfect description of the Singapura.

As a result of this campaign (which gave rise to great emotions in the locals, as they considered the merlion was the official mascot of Singapore) there are even Singapura-statues now on the banks of the Singapore river – the place where this breed is said to have originated.

Because of its rise from the drains to the much loved cat breed status it has today, the Singapura cats are sometimes called the Cinderellas of the cat fancy.

This tiny cat breed is still very rare – at the turn of the millennia there were around 2000 purebred Singapuras in the world. But hopefully, with the help of respectable breeders and carefully supervised breeding programs this lovely breed will increase in numbers.

Do you have a lovable litte,
Singapura? If so, you can
tell all about it, just >
CLICK HERE