Somali Cat as a Pet

So what kind of a pet is a Somali cat? 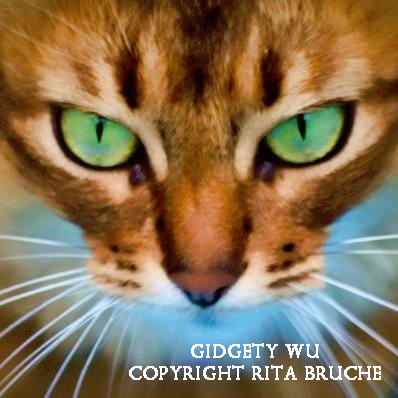 I can tell you from my own experience. We have the most sociable, loving, curious and energetic Somali cat living with us. He proves true the fact that Somalis are intensely affectionate towards their people.

For this cat really is social – it is absolutely thrilled to meet new people. They literally greet all the visitors at the door, and our Somali Rolli (who also writes the diary here) is also demanding attention by miowing and purring with all his might. The effect is rather endearing, especially when the voice of a Somali is rather quiet. But the purr is all the stronger! They also have an endearing chirp and trill when they mean business. 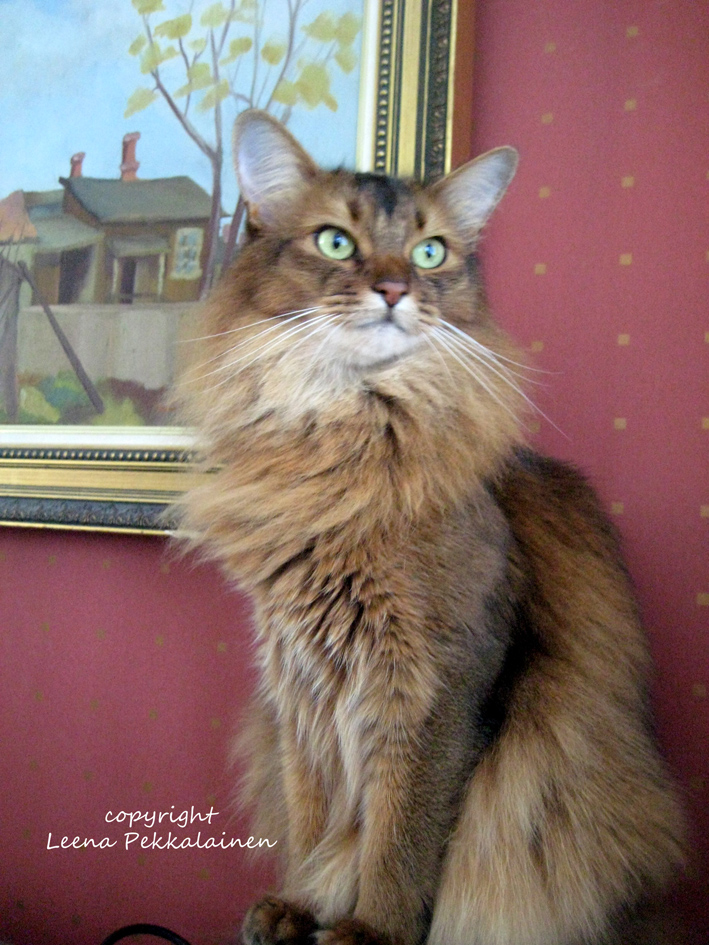 They love people so much and are very good with children. They are patient towards the little one – I  witnessed it myself. A friend’s little daughter was a real tornado when she was younger. She would do as she pleased no matter how much her mother tried to keep her in check (she had grown out of the phase already, but I am sure any parent recognizes this behavior…). They came to visit and the moment came when it was a bit too quiet. I went to see what was happening, and found the little girl sitting in front of Rolli, with both her hands around his throat, shaking the cat. And what did Rolli do? Sat still and purred like a tractor… Of course the little girl was reprimanded and given a talk about how to behave with animals. Rolli sat there all the while, purring happily.

It is best the children are taught how to handle cats and animals with respect. Very young children may not understand what they do to animals. Introduce the Somali and the family children and dogs in a controlled environment. But when the children are of school-age, they and the Somali cat can be the best of friends.

Also if a lot of visitors come to the house at the same time, Rolli tries to find a spot in the center of everyone. The Somali cats want to be in the center of attention and are very persistent in getting it. They are so social it is not good to have just one Somali cat if you are away from home during the days. It would be best if a Somali cat has other feline companions. Somalis or Abys. And from experience I can recommend Abys. 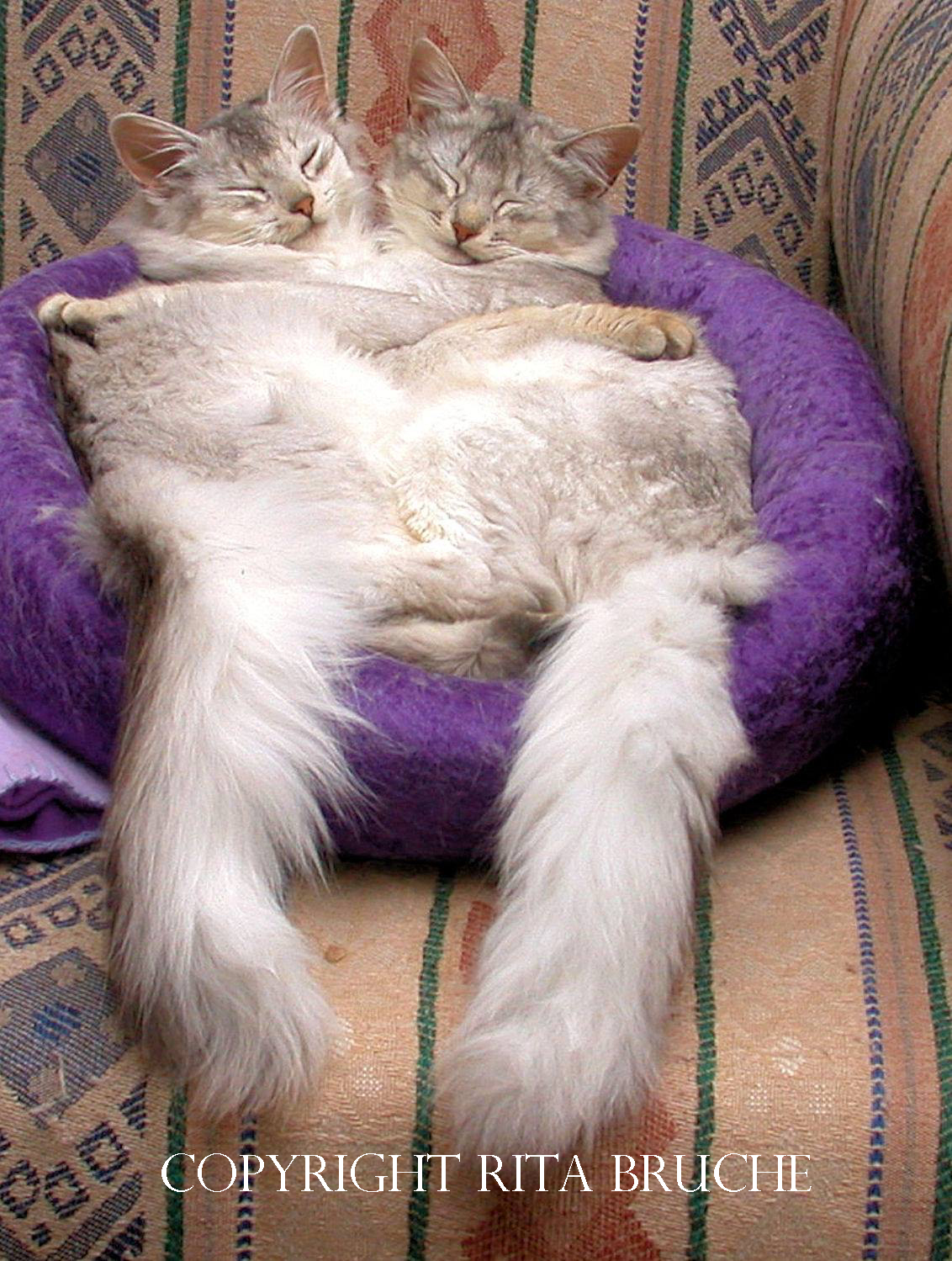 When Rolli came to us, he was true to his breed and settled in his new home immediately (he was 11 months old at the time). He came from a home where there were big dogs (two Rhodesian ridgebacks and a Saluki) and has always shown affection towards dogs. When we went to the breeder’s home for the first time, the cats were lying between the front paws of the ridgebacks, washing the dogs’ heads.

We have not had dog visitors, but whenever he hears a dog bark, he runs to the window. If we have petted a dog and come home, Rolli purrs and butts his head on our legs, and tries to wash our hands. When our door was once open and there was a dog outside (a very Odie-like spaniel who loved everything and everyone), our cats (two Abys and Rolli) just stared at the dog. Not a hiss, no aggressive behavior. (The Abys came from the same breeder as Rolli so they all loved dogs). 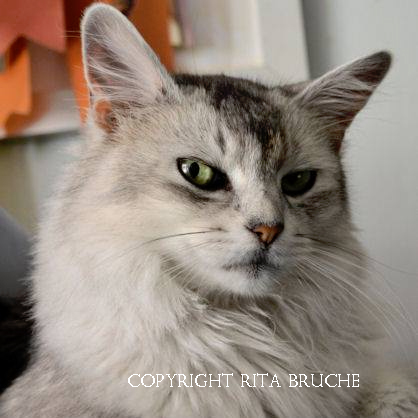 The Somali cat has been described as one of the most intelligent cat breed in the world. I have to agree. They learn very quickly how to open cupboards, feeding automats – and how to climb to your lap no matter how busy you pretend to be. They are so active and willing to share every aspect of your life, they are called the dog-cat. Much like the Abys they descend from. Where ever you walk, the Somali walks with you (preferably in front of you so you will have to watch where you step – they are literally underfoot). Whatever you do, a curious Somali observes you – like if you try to cook or do the dishes (the Somalis are known to be fascinated by water). The best observation point in a Somali’s opinion is between you and the thing you are doing. That way you can enjoy the plume of a tail against your face. Who wouldn’t love that?

They consider themselves to be full members of the family, and would probably wonder if you tried to explain to them they are not human.

Their personality is very alert, lively, and extremely curious and loving. They are so playful they are like clowns of the cat world. In this they also resemble the Abys a lot – and because of their clown-like playful personality they are sometimes called Aby-silly-ans. When I compare our two Abys to our Somali, they are all just as playful, but the Somali certainly is the clown of the lot. They perform sudden spurts, yowling and jumping.

Certainly the Somali gets into all sorts of mischief, but so charmingly you don’t really mind. Just remember that this cat loves heights and cat get there very easily, so don’t put anything valuable on top of shelves – even though a Somali cat is not clumsy. They rarely knock off things to the floor, unless it is on purpose. And do get your Somali a perch he can climb up to.

Even though the Somali cat is very intelligent and playful, they aren’t going to do anything to your bidding. I can vouch for that. They learn to fetch, but only fetch if the mood strikes them. The Somali does things when s/he wants to, and is stubborn to the extreme.

The Somali Cat aka Monkey Paws 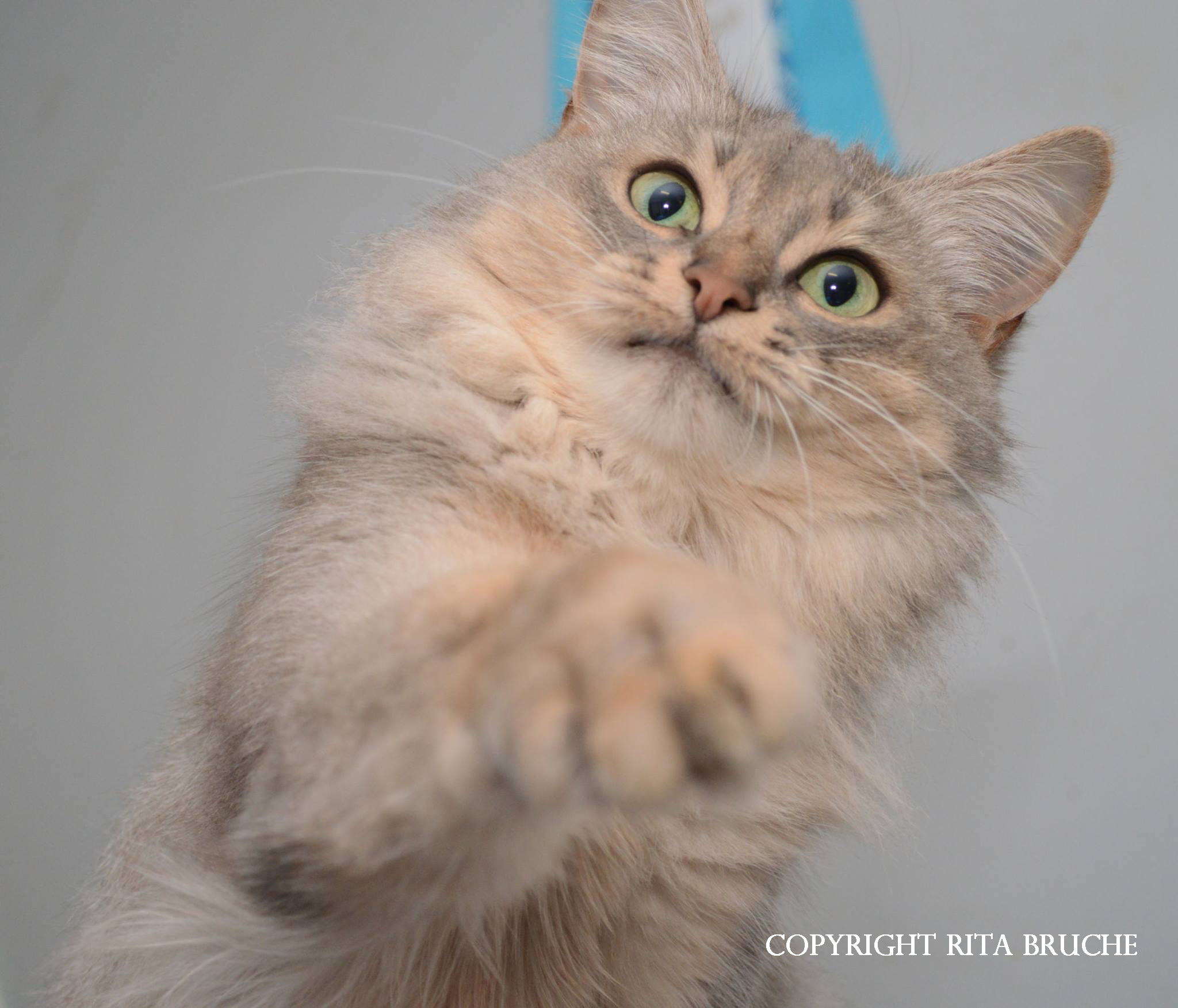 The Somalis are sometimes called monkey paws – they have dexterous paws they use almost like hands. They put this skill to good use when the want to wash your hands or grab your hands when they want you to pet them. Not using claws, mind you. They have a trait of washing the hair of their owners to such an extent that it is said they have a hair-dresser gene. This is certainly true with our Somali. He especially loves short hair and can spend a long while sitting on the backrest of our sofa, washing the hair of the chosen victim. And he does this with such gusto you know you have been very well groomed indeed when you get up. A hair dresser extraordinaire…

As a breed the Somali is long-lived (estimated life span 11-16 years).

The Somali’s coat does need moderate grooming -  especially in the spring when he is shedding the winter coat. Also his britches need attention – bits of poop may get stuck there. So brush your Somali cat often to avoid a tangled coat. If you notice a need for cleaning after your Somali has been to the sand box, wipe his hind quarters with a moist wipe. As our Somali is no show cat, I often cut off the longest hairs of his britches. But be very careful if you do this so you won’t hurt the cat – ask someone else in the family to keep the cat still, it is not safe to do this alone. 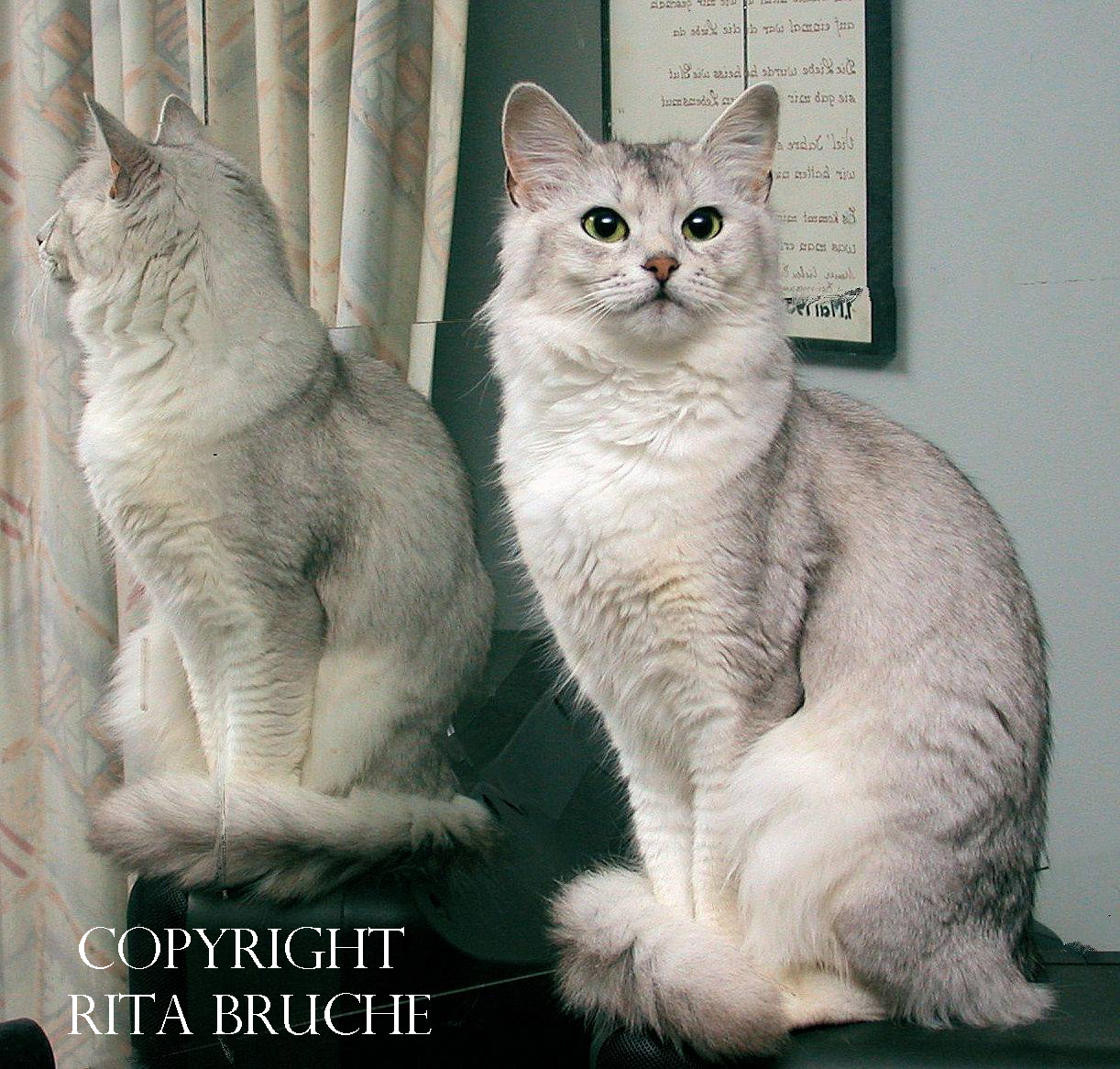 Because of his social nature, keep the Somali cat as an indoor cat. He is too beautiful and too trusting – anyone could steal him. Also he might not know to avoid foxes and other predators out there. The Somali cats are very good hunters, though. Our Somali has twice caught a bird on the balcony. The openings were covered with chicken-wire panels so the cats could not go out -  but the birds could come in. Hubby dear opened the balcony door one morning not noticing there was a little bird there. I woke up to a horrific noise of falling furniture, which took a few seconds, and then Rolli walked in proudly, with two wings sticking out of his mouth. The poor bird had lost its life in an instant, and all we could do was to throw Rolli’s gift into the garbage.

The Somali cat loves his food – and everyone else’s food too. So if you have several cats, supervise their dinner as the food-thief Somali will gobble up his food first, and then go to neighbor’s bowl. And you know what happens when they overeat – they throw up. Preferably on the plushest carpet they can find.

So there's the Somali cat in a nutshell. Once you have had the privilege of sharing your life with one, you cannot imagine your life without one. 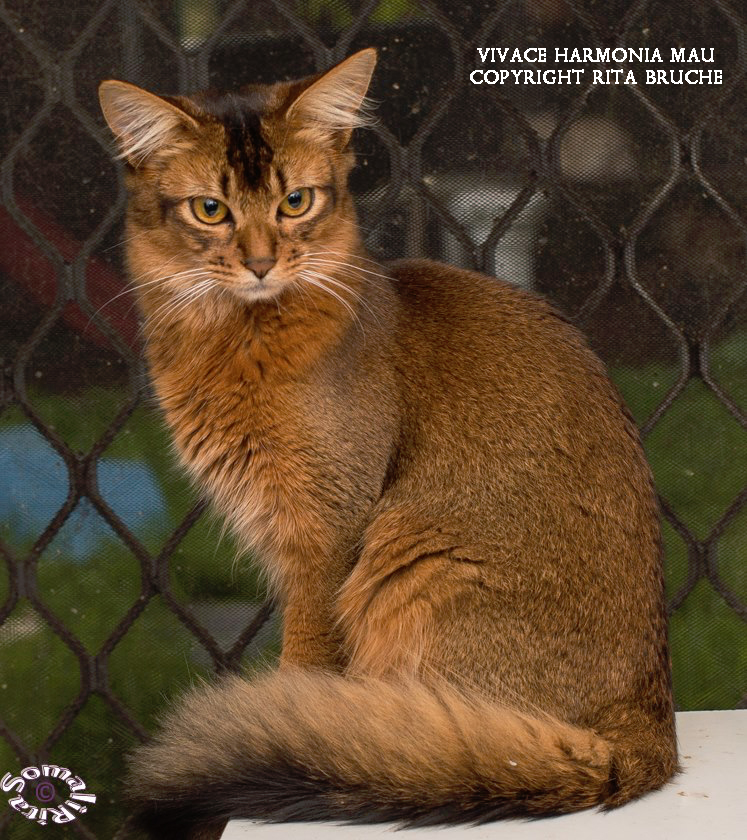 Thank you, RitaBruche of Vivace Somali Cattery for the permission to use your beautiful photos.

Back to Homepage from Somali Cat as a Pet

History of the Somalis

Looks and colors of the breed