There are different types of Siamese cats - the result of a long breeding program.

The Siamese most people know these days is a result of breeding a very elongated and slender cat. Breeders began to favor this type in the 1950's - 1960's. The head became wedge-shaped and the ears extremely big and wide-set.

The traditional Siamese cat type began to disappear from the cat shows and was not much seen there after the 1980's.

The Apple-head or Traditional Siamese Cat

Still some breeders decided to keep on breeding the traditional type, and carefully planned their breeding program. They organized themselves in 1987 and formed the Traditional and Classic Cat International.  The intent is of preserving the traditional line from disappearing. Also genetic health was of great importance to them.  This was because the striving for an extremely lean cat caused genetic problems, because of inbreeding.

The Traditional and Classic Cat Inernational's goal was to bring back and maintain the Old Style Siamese cat's look.  And certainly the Traditional Siamese is beginning to become more popular as time passes. It may be some people simply like a more traditional, softer and rounder, traditional cat form. The original Siamese cats did have round faces, and heavier bodies, and they were muscular and rounded in stature. So developing the Applehead Siamese is simply returning to the breed's roots.

The body shape of the Traditional Siamese is rounder - the bones are medium-sized, but the body  is elongated - moderately long, but not tubular - and high on the legs. It is lithe, but sunstantial.  The tail is as long as the body, taperig towards the tip.

The body is describe to be of "foreign type" instead of "oriental type". The head is wedge-shaped, but with rounded cheeks and a wedge-shaped muzzle. The head is longer than it is wide, but this is not very pronounced. The muzzle is shorter and the ears are set higher than modern Siamese's, and are from medium to moderately large in size. The tips of the ears are pointing slight outward at a slight angle.

The eyes of the Traditional Siamese are from medium to slightly large in size. They are of full almond shape, not extremely oriental.

Because of the rounder head shape the cat is also called the Applehead Siamese.

The Applehead Siamese was brought back through cross-breeding the Siamese with shorthair breeds (especially the American and British Shorthairs). This created a rounder, shorter face and head - nicknamed the Applehead. These cats have the same original ancestors as the Modern Siamese does, but only a few recent ones, if any.

There is some discussion if the sleek body type of the Siamese is the original one. Certainly the Cat Book Poems does show a sleek Siamese, but the type isn't extreme.

The other names for the Traditional or Applehead Siamese are Traditional Siamese, and Thai Cat. Tica has accepted the Thai Cat as a separate breed, meaning the Wichien-Maat cats / Thaikatze imported from Thailand.

Despite its different conformation, the Traditional Siamese has the same lovely, devoted character as the Modern Siamese.  So which ever "version" you choose, you will get a cat that is 100% Siamese. 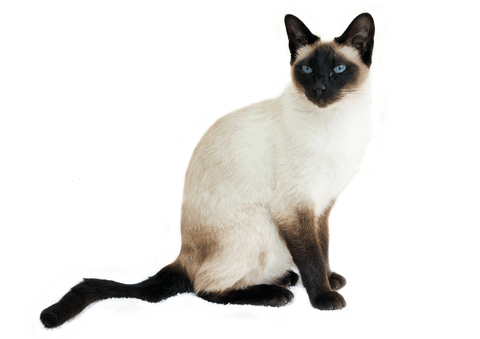 The Applehead Siamese is ofen called Old-Style or Classic, but they are not quite the same. The OldStyle or Classic Siamese  (or Old Fashioned Siamese) are cats that look the same the Siamese did between WW II and the 70's.

The Old-Style Siamese cats can have all the Siamese colors, and can also be albino.

Photo copyright by Jagodka at Dreamstime

The Modern Siamese is also called the Wedgehead, and sometimes Extreme Siamese. It has the most extreme body type - very slender and elegant, slight, long and thin. It has a long, thin nose and a straight profile. This is the first one of the different types of Siamese many people think first about, when it comes to Siamese cats. 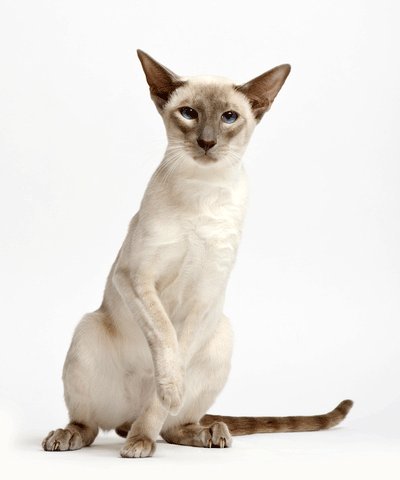 Copyright of image: Isselee at Dreamstime.

There is yet another extreme version of the Siamese. The head is very sharp and pointed and the ears are huge. The eyes are extremely slanted, and the body extremely long and thin. Too much breeding has caused genetic problems, and this type of Siamese has been known to have immune system problems. As a result the age of the cat has been reduced, and can be only five years…  Too much genetic tampering is not good for any animal breed.  So if you are interested in this extreme type, check how long the cats in the breeding line have lived.

Back to Homepage from Different Types of Siamese

Looks of the modern Siamese cat

Go to Siamese cat legends from different types of Siamese

The photographs and paintings on Different Types of Siamese are copyrighted by the artists. Do not copy.