The Abyssinian cats look a lot similar to the cats in ancient Egyptian art, which probably gave rise to the story that they were descendants of the sacred cats worshipped in Egypt thousands of years ago. Still, the latest genetic studies suggest that the Aby actually originates from South-East Asia, near the coast of the Indian Ocean. But you cannot deny the Abys do have a resemblance to the ancient cats of the mysterius pantheon of ancient Egypt. And the below story also emphasizes this connection to Egypt.

There is a story about how the first Aby was brought to Europe (to Great Britain to be exact). According to this story the first Abyssinian was taken from the ancient port of Alexandria on the Mediterranean coast of Egypt.

It was Mrs Barrett-Lennard who, according to this story, took the cat with her when she left with her captain-husband for their voyage back home.

This is a charming story, but not proven to be true. Still it tells how cats were gaining popularity as pets, their beauty was much appreciated during the Victorian era and as a result cat breeding became more popular.

But still, the name Abyssinian has its roots in the times when the British were warring in Abyssinia. This happened in 1867-1868, and it is during this time that the Abyssinian breed was developed. So perhaps there is a grain of truth in the story of how the first Aby came to England – at least the times match.

Actually it is not possible to verify the actual origins of the Aby. But without doubt, it is one of the oldest cat breeds – the first Aby was exhibited in England at the Chrystal Palace already in 1871 and in all probability the breed was developed in England. As proof of this breed's connection to England, every modern Abyssinian cat can trace its descent to Great Britain. 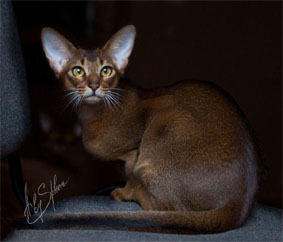 The most striking feature of the Abyssinian cat is its beautiful ticked coat. This means that each individual hair is striped or banded with different colors. The root of each hair is lighter, and moving towards the tip of the hair there are darker stripes. The darkest of “ticking” color is at the very tip of the hair. The stomach, chest and inner sides of the legs are unticked, and the hair is even softer.

A little four-year-old (her age when I write this) girl we know and who determinedly comes to visit our cats said the color resembles that of a hare. Well, come to think of it, so it really does.

Do you need to take your cat to a cattery when you go away from home to a holiday or work trip? Of course it would be best if the cat could stay at home, but this is not always possible. If you worry how your cat will adjust to a cattery, there are ways to help this.

I have used Feliway when our cats have been stressed - it really helps.

Also - bring your own cat litter and cat food your cat is used to. Smells of home have a calming effect. So bring the cat's own blanket and some clothes you have been wearing that give your scent.

Our little Aby girl Pipsa (you can see her photo on the right with the flowers) must have the silkiest, shiniest coat I have ever seen.

There are several colors of Abyssinian: Usual or Ruddy, Sorrel/Red, Blue, Fawn, Silver, Chocolate and Lilac. Each color emphasizes the elegance of the Aby beautifully.

White is permitted only above the lips, beside nostrils and chin, but it should not reach the chest.You see this white color well in the below photo of Abysphere Shaman's crossing by the Abysphere cattery. (Used here with kind permission - thank you!) 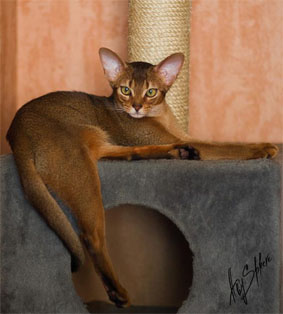 The neck of Abyssinian cats is elegant and the head is gently rounded (the males have somewhat rounder cheeks) and the head is wide between the ears (look at the above photo to see what I mean). It is moderately wedge-shaped, and the ears should continue this wedge-line.

When looking at the profile, the nose and chin should form a vertical, straight line. The chin should be firm. The nose has a slight nose-break, but should have no bump. The muzzle should not be square nor sharply pointed. (I am of course partial, having Abys myself, but I have always considered the head and muzzle of an Aby to be very very pretty and elegant at the same time. A true picture-book breed!)

The ears are wide apart, large, and moderately pointed. They are sometimes described as “listening” in type. It is desirable for the ears to have tufts of hair at the tips. (I have to admit I haven't seen many examples of these tufts in Abys) The hair at the back of the ears is short and close lying, but inside the ear it is longer and lighter-colored.

(When our first Abys crossed the Rainbow bridge and it was time for our new Abys to come to our home, I noticed that in 18 years the breeding had certainly changed and the ears had become much bigger and turned outward - I have to admit I laughed they looked a bit "batty" when very young - huge ears like bat's. But when the cats grow these adorable ears become more proportionate - but they do remain big.)

Did you know that pale-colored cats can get sunburn to their ears? If your cat goes out, protect the ears with sun cream. (Sun creams meant for people can be toxic, so buy a pet-friendly sun cream from your vet or pet-shop) Remember - sun may cause cancerous growth in your cat's ears.

The eyes of the Aby are beautiful. They are wide apart, almond-shaped (moderately pointed), large and expressive. The Aby had a kind look in its eyes, intelligent and friendly. The eyes can be green, hazel or amber in color – but the richer the color, the better. (There is a theory that the longer it takes for the eyes to change their color from the kitten blue , the deeper the color will be.)

Above the eyes there is an M-shaped marking, the so-called “frown line”.

The legs are slender and elegant, the paws are oval. The Aby stands well “off the ground”, giving the effect of being tip-toe.

The male Abyssinian cats are larger than the female. The female Abys are more fine-boned and quite pretty. They are also more active and playful than the males. 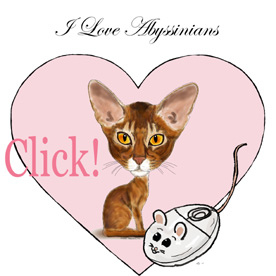