The first thing in Ragdoll cats that gets your attention are the blue eyes and the sheer size of the cat!

Ragdoll cats are big. Huge, compared to other cats. The Ragdoll was listed in the Guiness Book of Records as the largest domestic cat. And for a good reason too!

(Hmm – I have a very social Somali cat that insists its place is in my lap no matter where I am or what I do. He is quite a slender cute thing, but even so his presence can stop me from typing with my computer or reading a book. When I think of a Ragdoll doing the same… Me lying on the sofa with 30 pounds / 14 kg of cat on top? That just might make breathing slightly difficult... Maybe sitting would be the best option if your Ragdoll wanted to show you its affection. But would I even see my computer screen if a big Ragdoll decided to sit on my lap? Might make the building of this cat website slightly more difficult…)

A Ragdoll cat’s body is large, muscular and heavy and its torso is rather long – up to 3 feet. It has a broad chest, and its hindquarters are big – the hind legs are slightly longer than the forelegs.

The Ragdoll is slow to mature, and reaches its full size and beauty at around three years of age. Its life expectancy can be as much as 15 to 25 years. Especially, if you are wise enough to keep your Ragdoll indoors.

And the coat – oh, such a lovely medium to long haired coat! (The Ragdoll is considered to be a semi-long haired cat breed).

The traditional Ragdoll has a color point coat, which means its body is of lighter color than ears, tail, legs and nose. There are also mitted and bicolor ragdolls. To define these quickly: the color point has no white, the mitted one has white paws and the bicolor has white on face too.

The coat is longer around the neck (this “mane” is called the ruff) and on the back of hind legs (this is called the britches). The cat has also tuffs on ears and between the toes (don’t you just love those tuffs between the toes! I think they are so adorable!) The Ragdoll's has a really sweet expression. 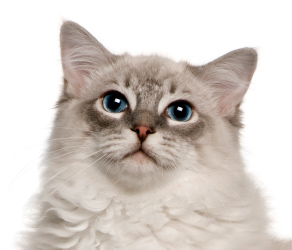 And of course the tail matches the rest of the cat – a lovely, bushy, proud tail!

The coat is so soft and silky it feel like the hair of a bunny rabbit. The coat is mostly long guard hairs and lacks a dense undercoat. This of course means the hair does not mat quite so easily and is easier to maintain. So just like a Turkish Angora we have here a low-maintenance semi-long haired cat breed. But still – this doesn’t mean you should not groom your Ragdoll. It is good to groom it twice a week at least. And do remember to check the armpits – the hairs may get tangled there when the real shedding season is in. (Yes, the Ragdoll does shed its hair, despite the popular myth telling it doesn’t – still it does so less than other medium-long or long haired cats.)

Combing and brushing Ragdoll cats throughout the year certainly reduces the hair-coverage on your furniture. So unless you prefer to have some extra padding in the form of long cat hairs on your chairs, do the grooming.

Of course if you wish to keep your couch fur-free, you could try to convince your Ragdoll of the matter by using the

Ragdoll cats have a rather cute loose “fatty pad” – kind of a fatty pendant on the abdomen. It may sound a bit strange, but looks just right on this big cat.

The neckof a Ragdoll cat is short and strong, of course. The head is wedge-shaped, rounded and the cheeks are well developed . The chin of a ragdoll is well-defined. The profile is curved.

The ears are large and rounded and tilted slightly forward.

And the eyes – those beautiful large, oval eyes! All pointed colors have blue eyes, as the eye color is caused by the same genes as the point coloration. The more intense the color, the better.

The solid and mink colors can have blue-green (aqua) and green-gold eyes. Sometimes the Ragdoll can be odd-eyed, which means the eyes are of different color.

Despite its big size the Ragdoll still is an elegant cat. Big beautiful eyes, shiny soft coat and bushy tail – and of course the elegant walk when it follows you around… A truly beautiful cat breed for anyone who likes big cats.

If you wish to see beautiful pictures of Ragdoll cats, click here! 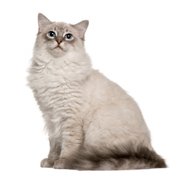 Do you have a relaxed, lovable, lovely Ragdoll? If so, you can
tell all about it, just >
CLICK HERE 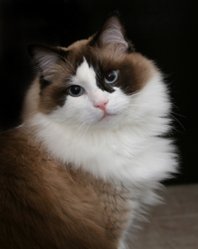 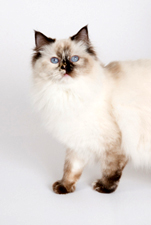