I remember one time I saw the Ragdoll cat breed on TV. It was a talk show, where two rock stars were being interviewed. The host of the show had two beautiful blue-eyed Ragdolls on the couch next to her. At first, that is.

When the first commercial break ended, the cats had migrated from the host’s couch to the opposite one where the wild-looking rock stars were sitting. They continued their interview, and when the camera next showed the rock stars completely, they both had a Ragdoll on their lap. And they were both stroking them, and the cats were “smiling” and suddenly the talk was about the cats instead of what the host wanted to ask about.

The Ragdoll cat breed is a unique one. Its breeding program started in the 1960’s and the Ragdoll cat has Ann Baker in USA to thank for its existence.

Josephine used to be an outdoor cat and bred freely. Her litters were mostly half-wild. Then Josephine got into a road accident and as result was kept indoors so she could recover. After that her litters were very relaxed and easygoing by nature. (This may have been caused by breeding with pet cats instead of wild ones.)

The kittens were big, had blue eyes and long beautiful coats.

Josephine was not Ann Baker’s own cat, so she bought some of these kittens, as she realized they were very special, and started her Ragdoll breeding program. This selective breeding program continued for years to make the breed gentle, big, limp when picked up, and to have pointed coloration. Ann Baker trademarked the “Ragdoll” name and held rights to it until 2005. Only the descendants of Josephine are considered to be real Ragdoll.

(Later crosses with the Persian created the Ragamuffin, which is now a breed of its own.) 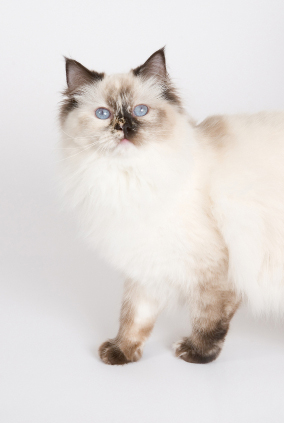 The Ragdoll cat breed has a very relaxed attitude towards life – literally. They acquired the breed name from the fact that they go all limp and relaxed like a rag doll when they are lifted. This characteristic becomes more pronounced when the cat gets older.

This is probably not just a genetic thing, but something the cat does when it wants to. Usually a cat needs to trust the person who is lifting it to be relaxed and as the Ragdoll is a very laid-back and well-balanced personality, this “limp” behavior is very common. (Talk about the mind affecting the body!)

This ragdoll-effect makes the Ragdoll cat breed very popular at cat shows. You can basically flop them on their back and scratch their tummy and they are all content.

This relaxed physique probably gave rise to the myth the Ragdoll doesn’t feel pain. But is does, just like any other cat.

The Ragdoll is one of the most sought after pedigree cats these days – and no wonder. It is docile, kind, placid. It is very affectionate, non-aggressive and gentle. You can say it is extremely docile. It likes to please its humans, so it can also be trained to fetch (especially with rewards, the tastier the reward, the better). It is also a very beautiful, handsome, big cat.

The voice of the Ragdoll is pretty quiet, (some call it a chirping meow) but there are some vocal exceptions, yodling like they ran out of the Sound of Music. They may do some yowling if they are lonesome and wish for attention. The Ragdoll loves company. So it would be best if it could have a cat companion. But cat companion or not, they still enjoy conversing with you.

The ragdoll cat breed is very people-oriented. Really. You come through the door – there your Ragdoll is, ready to greet you. They sleep in your bed if you allow (and even if you don’t, which may make the space a bit crowded).

The Ragdoll is also a good first cat - just remember it will grow quite big. 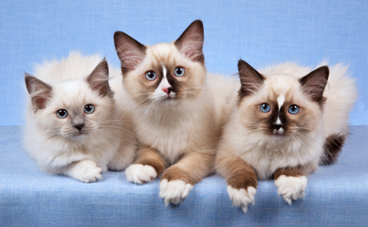 The Ragdoll cats are called “puppy cats” for a very good reason. They really follow you around like a puppy would – surprising many people just how much a cat wants to be with people. They want to be in the middle of events. They observe everything you do, and obviously think deep thoughts about human behavior while they are at it.

So there you walk in your home – the Ragdoll following you like a shadow. You may close the bathroom door to be alone, but be assured the Ragdoll sits outside, waiting for you to emerge. If you let them into the bathroom, they hop on the counter and observe with keen interest when you wash your teeth. (They are quite fascinated with water, some say they might even join you in shower or bath! Now with all that long hair that’s quite a lot of a wet cat around, so unless you wish to dry your whole apartment afterwards, maybe you should keep the bathroom door closed…)

If you allow them in your car – no biggy. They enjoy the ride. (But do not keep your cat free inside a car - should anything happen it is safest for everyone to keep your Ragdoll in its own cage) 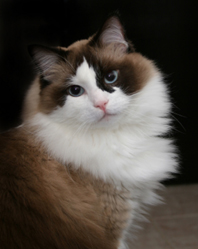 They get along well with other pets. And if you have children, this breed is maybe one of the most trustworthy for your kids to be around. They don’t tend to scratch and don’t mind being carried around – but always remember to supervise your children when they are with cats. This is one friendly cat, but a cat nevertheless. But in general it can be said the Ragdoll is very tolerant of toddlers and small children.

The Ragdoll cat breed is quite playful, but does not cause such havoc as some more active cats might. It doesn’t want to jump to such high perches as some lighter cats do (but it can jump). And thought the Ragdolls are rather laid-back, they are energetic cats. (Well how else would they follow you around 24/7?)

The Ragdoll cat breed is so affectionate, they consider everyone their best friend, be it a strange human or a dog. They are not very defensive, some say they lack the fight instinct completely. Not a very good thing for an outdoor cat. If you let it out, it can be catnapped for its beauty. Other bad things may happen too – so keep your Ragdoll indoors always. It learns to walk on a leash, so if you wish to go out with your cat, that is the way to do it. You may find your Ragdoll is ready for long walks with you.

Not all Ragdolls are lap cats, but they love being held. They love lying on their backs, giving air baths to their tummies, with hind legs wide apart. If there is a sun spot on the floor where to do this, then all the better!

The Ragdoll cat breed certainly has a sense of humor too, which you will certainly get to know if you choose to be owned by a Ragdoll.

So if you are looking for a beautiful, big cat which devotes itself to you, and don’t mind having an affectionate “puppy-cat” following you around where ever you go, the Ragdoll cat breed is the breed for you.

See other gifts available on Zazzle.

Here is more information about the Ragdoll's looks.
Here you will find the Ragdoll colors explained.
Searching for a Ragdoll breeder? Click here!
And here is a page for Ragdoll cat rescues to tell about themselves.

Do you have a lovable Ragdoll with a relaxed attitude to life and devoted to you? Tell us all about it!

If you send a really good picture of your cat, I may put it into my blog (you'll find it on the upper left hand corner of the nav bar) with a link to your page you build here. (The blog is one of my most read pages.) Just be sure you are the copyright holder of the photo so you are allowed to post it.

What Other Ragdoll Owners Have Said

Click below to see stories from other visitors to this page...

Gizmo is the most laid back cat in the world. He doesn't move unless forced and the kids can do anything to him. Honestly - if i stuck a broom handle behind …

Isabella Not rated yet
Well, as of yet there is not a whole lot to tell for she is only 7 weeks old...but what I have learned already is that she is totally "in love" with me. …

If you wish to share a story
and read what others
have said about their Ragdolls,
CLICK HERE!